What is Neuromarketing? The 7 Best Marketing Tricks To Elevate Value!

You don’t have to be Obi-Wan Kenobi to Jedi mind-trick people into doing what you want.

The force (i.e., the ability to manipulate people’s psychological weaknesses and biases) can, too, be strong within you. In fact, it’s strong within most brands; and certainly within your competitors.

The truth is, we, as humans, are pitifully predictable, especially when it comes to how we make decisions. No matter how much we like to believe that we’re advanced or sophisticated, our brains all work in a similar way.

Within all of us, there are innate, unconscious cognitive biases that dictate our decision making. And in the
age of brutal competition, how well you understand this concept can either make or break your brand.

The key to neuromarketing lies in understanding how we, as consumers, think.

The sooner we look within ourselves and understand what makes us do what we do, the faster
we’ll reach our bottom line.

So here are 7 simple ways to convince your audience that your droids are, in fact, the ones they’re looking for.

1. The Halo Effect In Neuromarketing 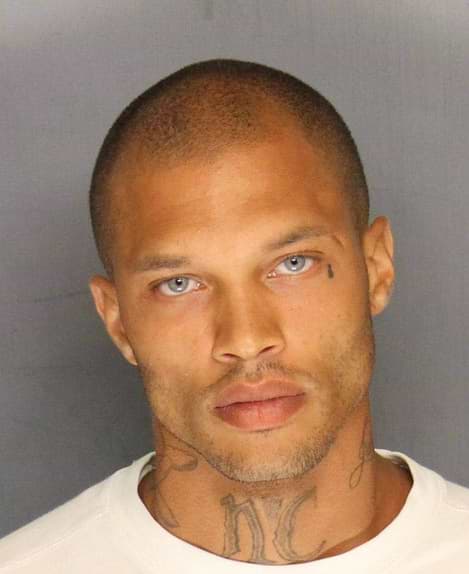 This dude went from leading a life of crime and gangs to walking New York Fashion Week and posing alongside Bar Rafaeli.

The halo effect is a cognitive bias to which we all, rather ashamedly, succumb. It is our brain’s barely rational tendency to equate all that is beautiful to all that is good.

In the case of our friend Jeremy, his piercing baby blues achieved such astronomic levels of hotness = good-ness that brands like Tommy Hilfiger flocked to forgive his criminal record and questionable past.

First coined by psychologist Edward Thorndike in the 1920s, the halo effect has yet to fade. The moment our brain perceives someone as good-looking, it immediately makes the judgment that the person must also be smart, kind, and positive.

It’s the reason why Jennifer Aniston is the face of Aveeno and George Clooney drinks so much Nespresso. When someone aesthetically pleasing advocates for a brand, everything good you associate with their beauty translates to the brand itself.

So, not surprisingly, our buddy Meeks is practically an influencer now. In fact, here he is telling the story of how this strange tendency of our human brain to be biased towards hunks gave him the life of his dreams.

Moral of the story? Find yourself a hottie to associate with your brand so all consumer rationality flies out the window.

You don’t need to be a neuromarketing guru to figure that one out.

2. Neuromarketing and the Sucker’s Bargain

AKA the anchoring effect.

Have you ever walked into an electronics store and immediately seen a 65-inch TV priced at some ridiculously high price point of say, $1,399?

Has your gaze then ever conveniently landed on an adjacent TV, also a 65 inch-er with almost identical image quality, but priced in BIG RED LETTERS at a much more reasonable $799?

Your immediate reaction to the second TV is almost always “good deal!”

This anchoring bias occurs because of your brain’s irrational tendency to fixate on the first number or piece of information it sees. The technique is so popular that Harvard Law Students widely use it as part of their negotiation training.

In the electronic store case, since $1,399 is the first price you see, it instantly becomes the benchmark against which you will compare all other prices.

So, even if there’s a TV from a lesser-known brand available with the same specs but going for $399 instead, your unconscious bias is immediately going to dismiss it as the “cheap” option.

As consumers, we tend to go for the happy middle. The one that makes us feel like we opted for a more premium product while still getting a good deal.

From retail to e-commerce, brands employ this simple tactic to give you the illusion of control, the fallacy of a bargain. When really, they probably never even had the $1,399-er in stock in the first place!

You see, it’s all about perception.

If you interfere with the customer’s shopping experience and decision-making process, carefully placing perception-altering variables in their way, you place your brand in control of how your prices are viewed.

In fact, it rarely has anything to do with the inherent value of your product at all. It’s the perceived value that matters.

Exploiting this type of bias is neuromarketing at it’s finest. Or rather, consumer neuroscience.

3. The Decoy Effect in Neuromarketing

Just in case that wasn’t devious enough, brands will often throw in a decoy option; one that’s such a terrible deal that you wonder why it’s even there in the first place.

I hate to break it to you, but quite simply, it’s there to make the other deals look better. It’s placed there for the sole purpose of exploiting your psychological biases.

This is perhaps most expertly engineered, as most things are, by the masterminds over at Apple inc.

Take a look at the 2020 iPhone options below.

The XR is an older model. An innocent observer might deem it unbiased, even considerate, of Apple to include it; like they’re doing you some sort of favor by showing you that a cheaper option exists.

But, upon closer inspection, it’s clearly thrown in there to persuade you that the iPhone 11 is the obvious deal of choice.

It’s designed to make you think: “You mean for just $100 more I get a dual camera, an extra hour of battery life, and a brand new model? Why on EARTH would anyone pick the older, bulkier, much less cool XR?!” 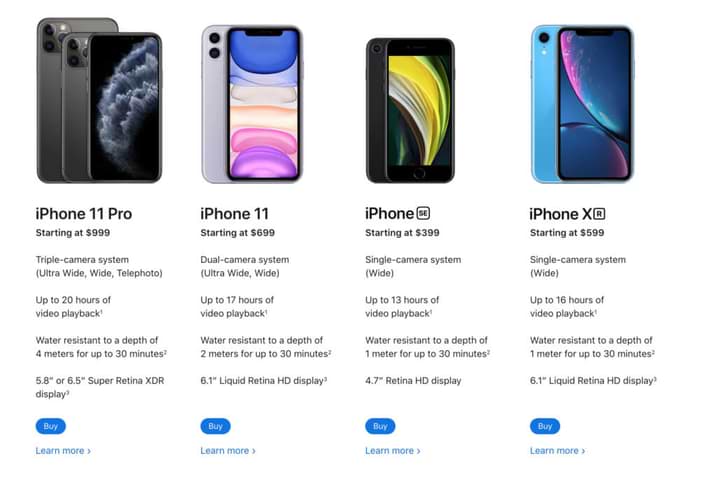 The decoy effect is an extremely self-serving tactic that capitalizes on the common bias that is wanting a good deal. And in some sort of great, unfair irony, it leads to us making poor decisions that directly contradict our ultimate goal of saving money.

So right about now, you might be thinking: how doesn’t every consumer out there know this? And how am I supposed to unsee this?

But I’m here to tell you, my friends: these cognitive biases within us are so powerful and so deep-seated that once they’re triggered, it’s challenging to talk yourself out of where you are being led.

Just take it from an iPhone XR user who has considered buying the 11. (Don’t judge.)

By the way, it’s not just Apple that does this. All major brands do! We’ve worked with a few of them ourselves 🙂

The bottom line is that, in hindsight, it’s no accident that, according to Business Insider, the iPhone 11 has been the number 1 selling iPhone of 2020.

4. In Neuromarketing, it’s All About the Feels

Did what I tell you bug you?
Are you feeling betrayed or angry?

Perhaps you’re even a little in awe of the neuromarketing genius silently at work around you.

What’s for sure is that you’re probably really excited to point all of this out next time you go shopping. You may even be getting ready to share this article right now.

Everyone knows that effective marketing should make people feel something; anything. If you incite an emotional reaction with an audience, you are much more likely to be remembered.

But the type of emotion you incite is also significant.

A study by Berger and Milkman in 2012 compared stories published in the New York Times. It found that stories that incited high-arousal emotions like awe and anger spread 30% faster than emotionally neutral ones.

Contrarily, stories that provoked low-arousal emotions like sadness had a measly 16% chance of being shared.

Get your audience fired up or excited, and you’ll earn yourselves some free, good old-fashioned word-of-mouth marketing. Bum them out, and you’ll spread that melancholy all the way to your ROI reports.

5. “That’s Weird; I JUST Spoke About this Yesterday.”

Is Alexa listening to your conversations? The jury’s still out on that one.

But in this day and age, it’s becoming increasingly difficult not to discuss something with a friend, only to see an ad for it hours later.

But before the tin hats come out, this isn’t to do with mass espionage. You know that thing where you hear about something for the first time; then you start seeing it everywhere?

That’s not just a coincidence. It’s what’s known as the Baader-Meinhof Phenomenon. It’s basically your brain’s way of selectively paying attention to things with which it is familiar.

Our brains are wired to recognize patterns and gravitate towards what we know. The rest of the copious amounts of stimuli coming our way every day is pretty much filtered out.

So, when we start seeing something repeatedly that we’ve just heard about, even if it’s just once or twice in a row, our brains insist on hyper-focusing on this new pattern we’ve identified, giving it extra significance.

Thus comes to the forefront the importance of retargeting. Once your audience has been introduced to your brand once, it is your responsibility to show up on their journey as many times as possible as they move through the purchase funnel at different times.

That way, you establish yourself as a familiar choice, the one they see most often. Because with repeated exposure comes credibility.

6. Neuromarkting Lemmings! All of you!

AKA the bandwagon effect. Perhaps the quickest way to get anyone to do what you want is to tell them everyone’s doing it.

If I were to tell you to eat a spoonful of cinnamon right now, you’d probably throw a look of confusion my way and mutter an agitated “no.” But if I added a hashtag and a camera, suddenly my request isn’t weird; it’s trendy.

Psychology Today defines the bandwagon effect as a psychological phenomenon whereby people do something primarily because other people are doing it, regardless of their own beliefs.

There have been countless social experiments proving this very point. In fact, the mere existence of dangerous internet challenges like the Tide Pod fiasco shows you how far this effect can go.

But what does this mean for your brand? It means that the more people talk about you positively, the more likely it is for people to pre-emptively like you before even trying what you have to offer.

Think about it – when’s the last time you bought anything on Amazon that didn’t already have tons of 5-star reviews or booked an Airbnb based on the same principle?

And how come someone like Ellen can go from most loved to most hated TV personality with the blink of an eye?

The bandwagon effect is right up there with things all companies must master. It’s up to you to set the narrative around your brand and influence the subconscious perception of your brand.

To achieve this, companies must focus on customer testimonials and influencer reviews/ambassadorships.

It also doesn’t hurt to shout from the rooftops about how impressive your sales numbers are.

The point is, testimonials are essential. They are your fast-track ticket to the trust of your prospective customer.

Listen, guys, we’re not here to start a war. But Pepsi and Coke are the same.

Branding is the art of transforming a first-time buyer into a lifetime customer. It’s the ability to form a brand identity that is so strong, so identifiable, so intertwined with the memories and experiences of your audience that it becomes a deep-rooted, non-negotiable preference from which people refuse to stray.

And I’m sorry, but no one does this better than Coca-Cola. They invented Santa, for God’s sake.

While most of us will never be Coca-Cola, every company should make branding a number one priority.

Because unfortunately, our simple, predictable, easy-to-Jedi-mind-trick human brains are a sucker for sticking to what they know and latching onto an established higher authority or group to validate their own identity.

So, there you have it. Seven sure-fire, psychologically proven ways to harness the power (or weakness) of the brain and use it effectively in your marketing strategies.

May the Force be with you.

Back to Blog
Splendid
Go to mobile version