Here we go again, debating whether a social media ban is justified or not.

But this time, it’s make or break.

This time, the stakes are far too high and the conversation needs to lead to an actual solution. So let’s jump right in.

Contents hide
1 What happened?
2 Well, not quite.
3 Why the Parler Ban is Different
4 So what’s the solution?
5 So what would government involvement look like in practice?

Over the last week or so, the internet exploded as Donald Trump received a lifetime ban from his favorite social media app, Twitter.

Pretty soon, all the other tech giants followed suit, starting with Facebook & Instagram, followed by Google, Twitch, Reddit, Shopify, and more, all of whom restricted, suspended, or outright removed Donald Trump’s accounts for good.

Then, in a move that rocked the internet further, Google suspended the social media app Parler.

Widely known for being kind of a right-wing version of Twitter, Parler is popular among conservatives and right-wingers thanks to its lax policies when it comes to moderation of content.

As it turns out, the app was heavily used by the far-right community to organize the Capitol Hill attack on January 6th.

As a result, Google stated that the lack of moderation by Parler was a full-blown “public safety threat”. Therefore, until the app upped its anti-egregious content moderation efforts to Google’s standards, it was not to be reinstated on the Play Store.

Not long after that, Apple went down the same route, banning Parler from the App Store too. And, in a final blow, Amazon decided to suspend the app from AWS, its cloud-hosting service, essentially making the app un-updatable, un-downloadable, and just plain unusable.

Parler CEO John Matze Jr wasted no time getting litigious and immediately sued the tech giants for using their monopoly to banish the competition.

And, not surprisingly, the rest of the conservative community was equally as outraged as Matze Jr.

But the incident also sparked a serious freedom of speech debate on both sides.

How did we get to a point where a handful of geeks in Silicon Valley now possess the absolute power to silence an individual like Donald Trump, as well as sentence an entire competing business to death, overnight?

The part that had the whole word shooketh for lack of a better term, was the fact that all of this seemed to happen in one fateful sweep.

It was like the Silicon Valley Avengers spontaneously assembled to stop two separate, but very connected entities.

And whereas in the past, conservatives would combat mainstream Social Media bans by saying that they didn’t need them and that they could start their own apps instead, this incident showed us all that even if you’re Iron Man with 74 million admirers, you can never go rogue.

Marvel will always own you. And it will always have the power to end you. (Not that Trump is in any way Tony Stark-ian. But humor the analogy – it’s rather fitting, we believe.)

So is that the way the world is going to work forever now? You piss off Jack Dorsey and Mark Zuckerberg, and you forfeit the right to have a voice?

One wrong Tweet and you turn your smartphone into a brick? 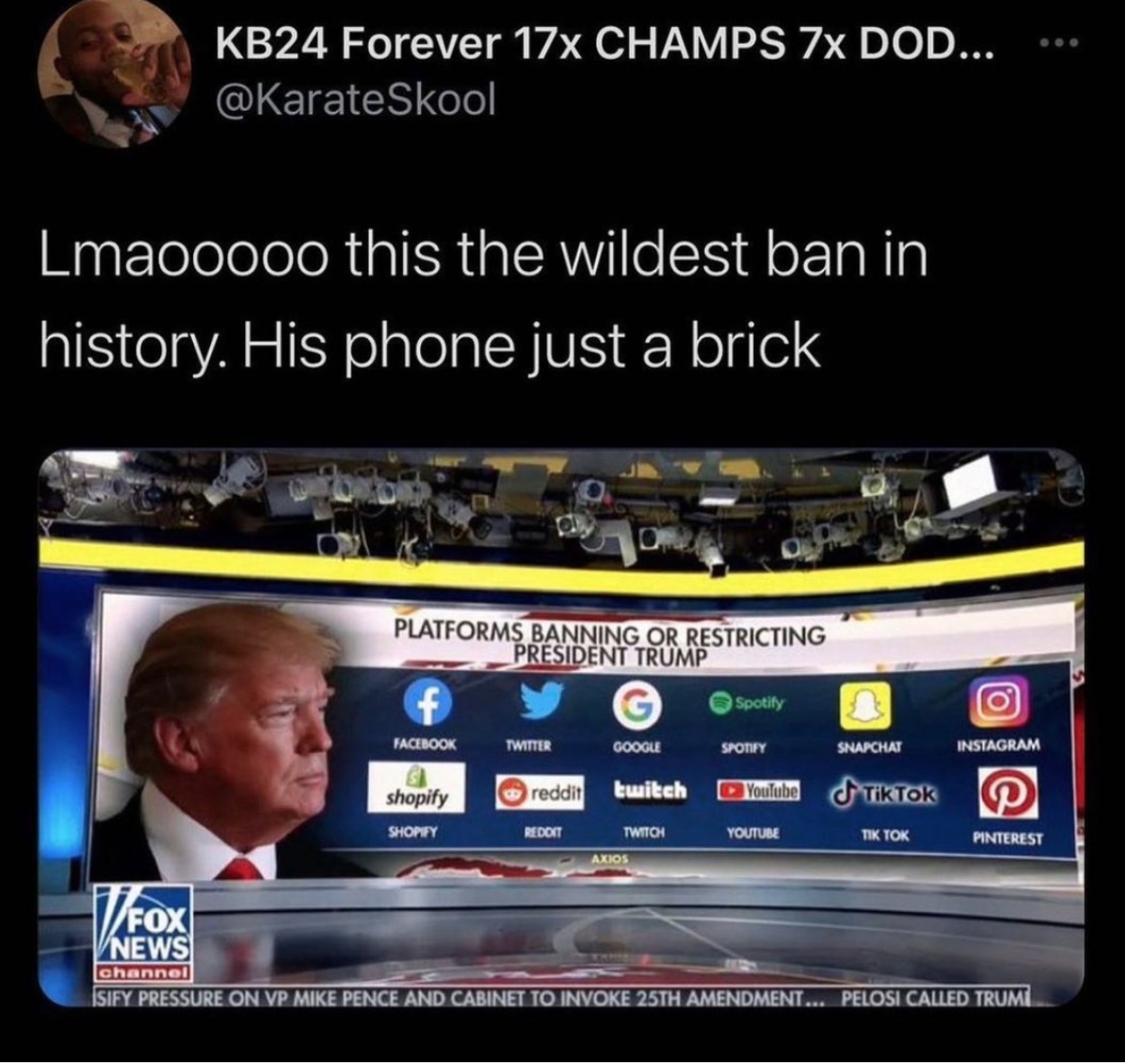 Look, we’re the last people to defend the likes of Donald Trump, Alex Jones, and the Nazi-sympathizing alt-right nuts that follow them. In fact, we’ve covered this extensively in an article before.

But one of these things is not like the other. And it’s time we pointed out the obvious.

If you’re outraged about the Trump ban and the Parler takedown for the same “free speech” reason, we invite you to consider this.

Remember that philosophical question about killing baby Hitler? Well, this kind of seems like a much less ethically challenging version of that.

The bottom line is – Trump isn’t just a regular guy freely expressing his opinions on social media. He’s a highly influential cult leader with the power to alter the minds of millions of Americans.

Remember, this is the guy that got people to drink bleach to fight coronavirus. He convinced half the country that a free and fair election was being “stolen” from them. And as a result, 5 people died because he asked them to go “take it back”.

And right now, he threatens the very existence of the United States democracy.

That’s not normal. That, to us, seems like a very exceptional case of fascism, one that demands exceptional treatment.

You can quibble over the whole “extra-ness” of the lifetime aspect of the ban all you want, but to us, worrying about Trump’s right to free speech at a time like this seems very akin to appeasement.

Homeboy’s marching into Poland and we’re stressing over how he’ll feel if we put him in his place.

So sue us if we’d rather be Jack Dorsey in the eyes of future historians, than Neville Chamberlain.

In fact, we’d have banned the guy way earlier – somewhere around the “I won this election BY A LOT” debacle.

Why the Parler Ban is Different

There are tons of downsides to it. For one, it fuels the crazies who believe in the QAnon conspiracy and the neo-nazi ideology.

It also makes a martyr out of Trump and his lackeys.

But to be honest, the Parler thing’s way worse.

Not only does it accomplish the exact 2 things we just mentioned, but it also gets people on both sides of the aisle debating censorship during a time when we really should be focusing on more pressing matters, like the pandemic, or the looming inauguration.

And let’s be real here – they have a valid point.

The truth is, your strategy to stop the KKK from meeting in the forest can’t just be to burn down the forest. You can hate propaganda machines like Breitbart, OANN, and Fox News all you want, but that doesn’t give you, as a competitor, the right to shut down their HQs.

There has to be some higher, third party power deciding what’s what.

Republican talking points can often be unbearable to listen to. But in this case, we have to agree.

How come other murderous dictators like Ayatollah Khamenei, Vladimir Putin, and Recep Tayyip Erdoğan are allowed to Tweet the day away, sans consequences?

The majority of the non-Trump-country-residing citizens of the world have spent the better part of 4 years crying for truth, accountability, and the abolishment of corruption and double standards.

So make it make sense. Apply the same rules for everyone.

If you’re going to use the defense of “we’re a private company so we’re allowed to do what we want”, use it. But stop with the hypocrisy.

Because ultimately, playing favorites does far more harm than good and sows the very hatred, divisiveness, and intolerance their “terms of use” policies claim to protect us from.

So what’s the solution?

Well, it seems like there’s only one viable solution.

First of all, the answer definitely isn’t to abandon all forms of content moderation. You still can’t falsely shout fire in a theater. And our right to swing our fists definitely still ends where your nose starts.

And influential institutions, be they private or public, must continue to fight and honor that balance.

So, yes, something should have been done about Parler either way. But not by Silicon Valley.

That’s like if your obnoxious older brother decided to expel you from school himself. You’d let it slide if he knocked out the bully who was about to blow up the school, but if his vigilanteism were to come f0r your right to education, you definitely wouldn’t stand for it.

If you ask us, the only solution to this problem is to get the government involved. Let the school decide.

Yes, these tech companies are private. And compromising their sovereignty is something laissez-faire Republicans would typically tremble at the thought of.

But in this case, it might be the one thing they need to truly protect their first amendment right.

Just like we said with Trump, Big Tech is an exceptional case. It’s a handful of companies that has the power to literally shut down an entire business; to silence the loudest voice; to change the course of both the political and social sphere.

So to treat them like any other business would be a mistake.

The only way to strip these CEOs from their power to dictate public discourse at such monumental levels is to get the government involved in high-stake content moderation decisions like the Parler case.

That way, private citizens would have elected representatives fighting their corner in Congress.

So what would government involvement look like in practice?

Well, aside from votes on big cases like Parler, it could start smaller.

The non-partisan(ish) newspaper The Hill brought this solution to our attention. And it seems like a great place to start.

Apparently, Ajit Pai, the widely despised Trump-appointed Chairman of the FCC was positing a reinterpretation of section 230 of the government’s policies on social media companies.

Among his outgoing efforts was an attempt to get Big Tech to publish their terms of use policies in order to get more consistency and transparency across the board.

A neat, fair, and relatively easy to implement solution. This would allow the public to hold the likes of Twitter accountable for any double-standard or hypocritical shenanigans and prevent bandwagon bans that have serious political consequences.

(Who knew you could be a net-neutrality-ending D-bag but also have nuanced, logical thoughts on the standardization of content moderation.)

As of yet, this hasn’t materialized. But still, as much as it pains us that it came from him, it’s definitely the best idea we’ve heard yet.

And no matter how tempting it is for the liberal left to rejoice at justice finally being served after 4 long years of racism, bigotry, and xenophobia, now is not the time to revel in karma.

Because who knows, one day, the MyPillow guy might buy out your favorite social media app and suddenly decide to silence your pro-choice, anti-gun, Green-New-Deal-loving voice, overnight.

And what would you do then?

Back to Blog
Splendid
Go to mobile version